Twitter | Rss-feed | Google + | Pinterest
Most of the Americans are living through paychecks; it seems as if they drag their life from one paycheck to the other. During their journey if some financial pitfall comes, they really have to depend on loans as they do not have spare money to meet the financial exigency. Maybe the lifestyle is such that even the frugal ones feel   stumped when unforeseen expenditure stares in their face. Then to meet these types of emergencies in between two paychecks, the people opt for short term loan, which is known by various  names such as cash advance, payday loans, fax free loans etc. As the short term loans charge high rate of interest, so it comes out to be expensive. If the borrower opts for roll over then the APR is sky rocketing. All this bothered CFPB and they issued regulatory control on the pay check lending industry in 2017. Among other things the payday lenders would be required to check  the borrower’s ability to repay the loan , before sanctioning the required amount. The regulation was to come in force from August 2019 but before that the Trump administration reviewed it and came with the conclusion that gauging the borrower’s ability to repay the loan before actually sanctioning will hit millions of needy people with bad credit history. As a result the CFPB has rescinded the ability to repay requirement.

CFPB did retain a few protections from 2017 regulation which will help the borrowers in a big way. Once the rule comes in effect in August 2019, lender will be required to notify borrower in writing, before  withdrawing   the money from the borrower’s account .The lender cannot withdraw the money without the permission of the borrower from his account  if the two consecutive attempts fail. This keeps the borrower safe from the multiple bank overdraft fees. The new change makes it easier for borrowers to borrow money without apprehension of incapable of paying back. It is entirely the call of the consumer if he wants to proceed for payday loan or not. In case he decides, he needs to verify with attorney general or state bank regulator, if the lender chosen is licensed to operate his business. It has been hinted by  CFPB that it might ease the  payment limit on debit card and on certain kind of products. 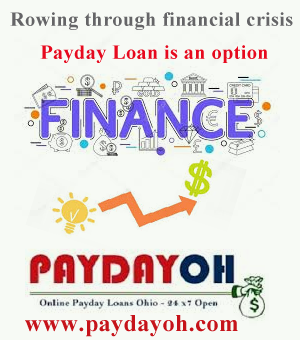 Rowing through financial crisis – Payday Loan is an option

In this debate of protecting borrower’s or lender’s interest, the traditional institutions like banks are disappointed for being kept away from the small dollar business. It is believed that if banks are given to operate small dollar business , they will handle in a more regulated way and in long run will help the consumers by not falling for less regulated practices of online payday loans run by lenders.

There are various other alternatives one can opt for besides payday loans. One can try traditional lenders and credit card issuers who specially cater to customers with bad credits. Credit Union Loans is another option. These loans too are short term loans ranging from $200 to$1,000 and it can be repaid between one to six months. The interest rate and fee of these loans are much lower as compared to payday loans. The maximum APR is 28% and credit union cannot charge fee more than$20 dollars. Unlike payday loans Ohio there is a limit on the frequency of loan taken within six months. At the most a  borrower  can take loan for three times over a span of six months.

Informal lending Circles have been in existence for pretty long . In this a group of people pool in money and it is given to a person who requires it. It is non-profitable and some companies are trying to formalize it. Mission Asset Fund, California is a good example of informal lending circles. Consumers require to join group and undergo online financial education courses, loans are decided in meetings with consensus of all the members of the group. The participants need to declare what all assets they have. They need to contribute money to start with lending. The loans carry zero% interest.

Secured credit card is another option to raise funds during emergency. It works like the regular credit card , the only difference is that you have to make deposit to receive a secured credit card. The deposit protects the card issuer in case you do not make payment.

One can also ask for financial help from friends and family members to meet the urgency of the situation. Next time if you face financial crisis,  do not lose your cool. Try for options discussed here.